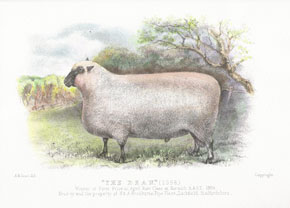 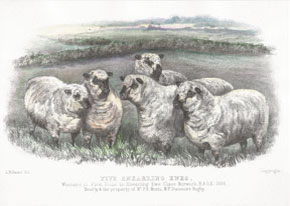 The Shropshire breed was developed in the West Midlands in the early 19th century from hardy native sheep that roamed upland and heath areas of Shropshire and neighbouring Staffordshire. Sheep of the region were already famed for the quality of their wool as long ago as the Middle Ages. And in the mid 17th Century, wool from Shropshire was still described as …“choicest and dearest in England”.

Following in the footsteps of livestock breeding pioneer, Robert Bakewell, farmers in Shropshire set about improving the indigenous sheep. Their breeding programmes altered certain characteristics – such as removing horns from rams – but care was taken to retain high quality wool and heavy fleeces. The meat producing capabilities of the new “Shropshire Down” were also greatly enhanced at this time.

The breed quickly made an impact on the agricultural scene, becoming very popular throughout Britain. In 1882, the Shropshire Sheep Breeders’ Association and Flock Book Society was formed. A year later, the society became the first in the country to publish a flock book recording breeding details of its rams, and so the Shropshire has the distinction of being Britain’s oldest pedigree sheep breed.

The dual-purpose nature of the breed, with its high quality wool and excellent meat, led to a great many exports.  Between 1900 and 1920, nearly 7,000 Shropshire rams were exported to all continents of the world where they were used to improve the indigenous sheep populations. Shropshire flocks are still to be found to this day in North America, Australia and New Zealand, and they are also fairly numerous in Northern Europe, where they are used to graze Christmas tree plantations.

The popularity of the Shropshire in Britain has also increased in recent years. Numbers have been steadily growing since the 1970s, when Shropshires were a rare breed, having lost ground to imported European sheep breeds. Today, there are more than 3,500 registered Shropshires in the UK. The breed was officially removed from the “Rare Breeds” register in February 2013.

Our own Alderton Flock was formed in 1999 and now numbers around 60 ewes, grazing rich grassland in the Severn valley. We are proud to continue the tradition of rearing this distinguished old breed and hope you will enjoy the gifts and other products in the Flock of Ages range, made using wool from these special sheep. 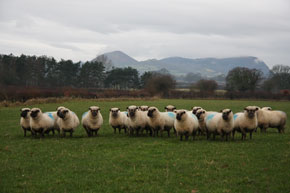 Traditional favourites, quirky creatures and exotic beasts, including dinosaurs, knitted to our own patterns and selected vintage designs.

An imaginative range of tea-cosies and cafetiere covers.

Creamy white yarn, produced from our own flock of Shropshire sheep, and various naturally coloured blends of Shropshire with either Shetland or Ryeland wool.

We sometimes have other gifts available – either using wool or based around our love animals. Try these Christmas dog collars!